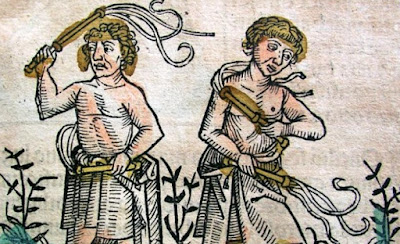 Let us cast a casual glance at an obscure footnote to Russian history:


"Skoptsy is a plural of 'skopets,' an archaic word meaning 'castrated one' in the Russian language. As their title indicates, the main feature of the sect was castration. They believed that after the expulsion from the Garden of Eden, Adam and Eve had the halves of the forbidden fruit grafted onto their bodies forming testicles and breasts. Thus, the removal of these sexual organs restored the Skoptsy to the pristine state before the Original Sin. In this the Skoptsy maintained that they were fulfilling Christ’s counsel of perfection in Matthew 19:12 and 18:8-9.

The reason was not that they were born in the wrong body, but:


"The Skoptsy also believed that a chief evil of the world is rooted in the lepost (bodily beauty, human sexuality, sex appeal, etc.) which prevents people from communicating with God. The way to perfection begins with the elimination of the cause followed by the liberation of soul. Castration ensured that all sins caused by lepost could not be committed."

Naive reader could get an idea that Skoptsy were just a handful of crazies who couldn’t afford good hashish and ended up excessively sniffing glue, while scissors, to their misfortune, happened to be ready at hand. However, it was not entirely so:


"Membership in the Skoptsy sect was not restricted to the peasant class. Nobles, military and naval officers, civil servants, priests and merchants were to be found in its ranks, and its numbers were so great that 515 male and 240 female members were transported to Siberia between 1847 and 1866 without seriously threatening its existence. In 1874 the sect numbered at least 5444, including 1465 women. Of these 703 men and 100 women had partaken in bodily mutilation."

Today, simply on account of cheap status whoring, people are prepared to amputate genitalia of their own children or feed them hormones (Interesting question: Were those primitives from forlorn times more or less merciful than their contemporary counterparts, when they tossed their offspring in the flames of Moloch? It seems to me that a few minutes of roasting or suffocating provides you with death more merciful than a life spent in crippled body, under the wing of a father and mother who were ready and willing, not only to mutilate you for the sake of one minute of fame and ounce of popularity, but also to push you in the public spotlight for to whole world to admire your induced invalidity.) We are not talking about stupid people simply trying to get on the front pages of the tabloids, but well educated, intelligent men and women convinced that they are working for a higher cause.

However, this is not an article about transsexuals, but only an attempt at comparison of one historical and one contemporary phenomenon: the key issue in both is the belief in the existence of Original Sin and the idea that this can be washed away only by great and deep suffering and renunciation – purchasing sainthood with self-mutilation:


"They believed that after the expulsion from the Garden of Eden, Adam and Eve had the halves of the forbidden fruit grafted onto their bodies forming testicles and breasts. Thus, the removal of these sexual organs restored the Skoptsy to the pristine state before the Original Sin."

The reason this occurred to me is because of an article in the Huffington Post, "Towards a Concept of White Wounding," massively shared via Twitter in the last few days by various Evilthinkers. Make sure you read it in its entirety. Every word of it is pure gold and only when taken in its entirety it leaves you with just the right taste in your mouth. However, the closing chorus is simply too good to be left unsung along:


"Thus, white wounding is a call to action. It’s time to put our friends, family, co-workers, bosses, partners, social media connections, and our own comfort aside. The problem is real, and it is killing people. At this moment one of the most important and rudimentary things white anti-racists can do is spread awareness among other whites about racial inequality and oppression. It’s time for white wounding."

The essential thing being pushed here is an idea that, in order to be saved from the 'sin' of racism, one has to suffer certain form of self-destruction, necessary for enlightenment and the forgiveness of sins. Broadly: one has to have faith in Original Sin, which can be washed away only by intense physical pain, abstinence from earthly delights, and by belonging to proper group of people.

In the case of the Skoptsy, the order of the day was getting castrated and following the leader who declared himself to be the Son of God. In the case of the contemporary liberal elite, one has to make his or hers fellow men suffer by chanting the mantra of diversity while constantly feeling ashamed of the sins of one's forefathers.


"When a man stops believing in God he doesn’t then believe in nothing, he believes anything."

This perfectly applies to the liberals of today, be they atheists or hippy-Christian abominations. They have faith in the Original Sin of patriarchy, misogyny, racism, and homophobia, and, in order to make amends, they’ll make their fellow men pass through fire and leave a poorer, uglier, crueler world to their descendants. They need more Fergusons, Rotherams, more suffering, pain, and horror, in order to liberate the corrupted souls from sin and bring them closer to the Lord's Progress:


"For I, Progress, your God, am a jealous God. I punish the sin of the fathers – those who hate me – down to the third and fourth generation, and show mercy to thousands who love me and obey my commands."

Bear in mind, of course, that the act of sacrifice won’t be equally distributed. The higher priesthood will sit back, smiling contently and observing the sacred deeds via their iPads. They’ll attend the diversity conferences in their 98% white-only neighborhoods, guarded by armed security, or they’ll visit Belgrade to get themselves photographed with children of Middle Eastern immigrants. People of poor beginnings and the generally lower strata of society – those who are not materially secure but are working like hell to get there – will, however, bear the full weight of the Glad Tidings upon their shoulders.


P.S. Comparisons of liberals with Skoptsy is entirely deliberate. Liberals have low levels of testosterone. Accepting political correctness is auto-castration.
Posted by Russell James at 4:00 PM