Why Do Jews Look the Way the Do? 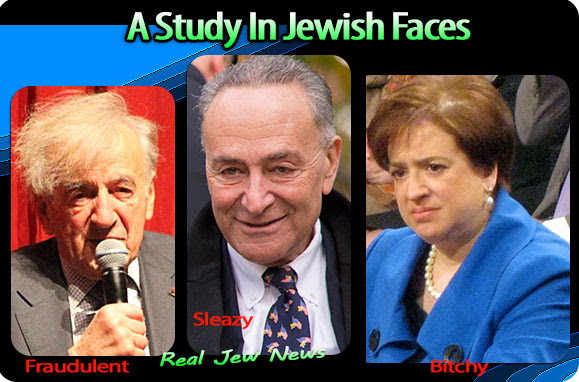 I have been seeing some “far-right” sites discussing the issue of Jewish physical appearance, and I remember one site having its members put up a rather extensive gallery of pictures of repulsive Jewish celebrities, which quite literally made me physically nauseous.  These sites usually discuss theories for the stereotypical physical appearance of (Ashkenazi) Jews, often invoking the “inbreeding” argument (see below).  Although I am really not interested in these HBD-style discussions, the trauma inflicted by viewing some of those faces has led me to propose my own ideas on this subject.

Two points.  First, this is not meant as any type of criticism or insult toward Jews.  It is instead a relatively dispassionate discussion of a very real phenomenon.  Most people, including I believe most Jews, understand that this is a group known for brains not beauty.  Of course, there are always exceptions; in biological phenomena, outliers always exist.  The existence of these exceptions by no means invalidates the reality that the typical Ashkenazi Jewish phenotype is very well represented by the likes of Anthony Weiner and Ruth Bader Ginsburg.

Second, this is a hypothesis, not a dogmatic insistence of reality.  Unlike the “movement” and HBD, I do not have The Lathe of Heaven Syndrome, there is no solipsism here.  Therefore, I do not cite data but merely provide ideas that constitute a hypothesis that requires more empirical testing.

I’m not going to bring up “Jewish inbreeding” as a mechanism for their physical defects, for the simple reason that some HBDers (e.g., Cochran) have been making a big song-and-dance about how the whole bottleneck/inbreeding thing for Jews is not true; I haven’t really looked at the data since I am not very interested.  I can make my arguments without invoking inbreeding and will therefore go ahead and do so.

Instead, here I assert that two major mechanisms account for the typically repulsive physical appearance of (Ashkenazi) Jews: their particular ancestral origins in the modern Middle/Near East coupled to admixture, and the lack of subsequent sexual selection for improved (mostly female) appearance.

Ashkenazi Jews are thought to have originated in the modern Middle/Near East in historical times, followed by entry into Europe and a significant initial degree of admixture with native Europeans (the paradigm is Middle Eastern males with European females; the Europeans initially were likely mostly Southern Europeans, with, later, Germanics and Slavs entering the picture as Jews infiltrated to the north and east).  The Middle Eastern origin of Jews is well revealed by the phenotypes of Jews such as Weiner, which betray (the nose! the nose!) the Near Eastern-Semitic-Araboid antecedents.  Many stereotypical Jewish physical traits, particularly facial traits, likely have their origin in this derivation from NEC Middle Eastern population streams.  However, that is not the full story.  After all, despite similarities, there are differences in appearance between Jews and Arabs; furthermore, the distinctive Ashkenazi appearance has more to do with an overall disharmonious, discordant, off-putting “affect” than it does with any grouping of single features (e.g., noses).  Therefore, it is not only the Middle Eastern origin that is the mechanism here, but the subsequent hybridization with European stocks, which led to a discordant mismatch of NEC and European features, a disharmonious combination of features that fit poorly together.  Even further, one can speculate that this combination never stabilized into a harmonious blend because of a lack of sexual selection for physical appearance, which is the subject of the next part of this analysis.

Many (most?) human groups have undergone some degree of sexual selection for physical appearance.  In many (Eurasian) groups, this is most directed at the female, but of course male appearance is also affected through inheritance of maternal traits.  Some HBDers (e.g., Frost) assert that this mechanism was most highly developed in the northern climes of Europe during the hunter-gatherer times (cue “movement” heavy breathing at the mention of hunter-gatherers), and this is likely true.  In any case, sexual selection for appearance occurred throughout Europe and in many areas of Asia as well.  It may well have also occurred in Negro Africa, but there focusing on male appearance (I do not speculate on Amerinds, but possibly they too partook in this mechanism, for which sex predominantly I do not know).

Jews, however, I see as different.  For them, sexual selection was about intelligence, ability, family connections, business or intellectual success.  A physically grotesque Jewess may very well have found eager marriage partners if she was the daughter of a successful businessman, rabbinical scholar, or some other sort of community leader. Thus, she would pair up with an equally grotesque male Jew, from an equally successful family, and they would produce ugly yet intelligent children, with a greater probability of survival than the children (if any were produced) of less intelligent Jews (of whatever physical appearance). Thus, for Jews, there was no “gracilization” of physical appearance that could have attenuated the distortions and unpleasant features derived from their unique ancestral origins. The Weiner and Bader Ginsburg phenotypes were thus perpetuated, along with high verbal intelligence, high ethnocentrism and neurotic intensity, and other stereotypical Jewish traits.

To summarize: The hypothesis is that the stereotypical (Ashkenazi) Jewish appearance is due to their origins rooted in the modern Middle/Near East, coupled to discordant admixture with European stocks, creating phenotypes that never became aesthetically stabilized and gracilized due to a lack of sexual selection for beauty.
Posted by Russell James at 3:00 PM